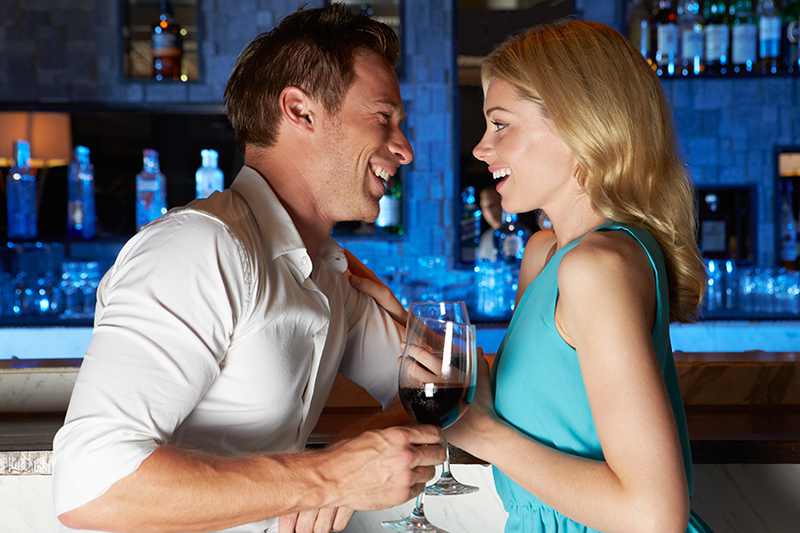 If You've Ever Wondered What to Say to a Girl, Wonder No More!

Summarizing again, , there are five major “trusts” that give you the confidence to approach:

And let’s start with our three ground rules:

The One You've Been Waiting For…

So you've probably been waiting to hear about the next thing we might trust to go up to someone we don’t know and start a conversation: The Words.

What does that mean?

The Words refers, obviously, to what you say.

So why do I say that you've been waiting for this one?

First let’s look at why I’ve put the others first, and then we’ll discuss the pros and cons of each. We haven’t really done that yet, and we won’t finish that discussion until we reach the last trust, anyway.

What Organizes these Five Trusts?

Believe it or not, these trusts are in order of increasing:

Hopefully my suggestions about using the situation can help you manipulate your view of the situation until it’s helpful even when it’s not.

The truth is, though, that you cannot decide what situation you are in. Who are you to the woman you want to speak to? Why are you there? What valid reasons do you have to speak to this angel?

Read that last paragraph again. Do you see how powerful that is?

Too many guys spend their entire adult lives trying to create situations that attract women to them. They strive for the nice house, the nice car, the “good job”–anything that will “help them meet women.”

In reality though, the ability to be good with women is its own skill! Once you learn this (as I'm teaching you through these articles), your situation doesn't matter nearly as much as you might think!

Nonetheless, you can – and many guys do – choose situations that are easier for you specifically. I prefer classy places that allow my discerning, tasteful nature to be shown to advantage.

Some guys avoid anywhere their scintillating conversation cannot be easily heard. Other guys don’t talk to women at a live show unless they’re on stage.

Unfortunately, many times the most desirable women avoid the restaurants and lounges that I prefer and only want to be at extremely loud clubs – primarily so that my buddy can’t talk to them above the loudspeakers.

Why You Never Really “Choose” the Women You Speak To…

You also can’t always choose the person you are talking to. Yes, you may only start conversations with people that seem friendly and open.

That may mean that you are talking to women that like you, rather than women you like.

It also may mean you are entirely screwed.

Sometimes the open, friendly sweetheart you start talking to is actually a “bitch with a beautiful smile.” It’s rare that women are actual full-on bitches. Some can certainly seem that way, however, if they mistake you for being a guy they are not interested in.

Why “Resting Bitch Face” May Be Your Worst Enemy

There’s much worse than that, though. It may not seem worse now, if your ego is fragile or your experience light, because this doesn’t involve any rejection. Trust me, the more women you talk to, the more you’ll realize that rejection is not the worst thing that can happen to you.

Rejection is like the soreness in your muscles two days after some enjoyable physical activity. It hurts, and you can avoid it, but there’s no way you’d rather sit on the couch and not get sore.

No, there’s much worse than talking to some awful woman that you thought was going to be a treat. What about the reverse?

Often a girl with a frown on just doesn’t know that she should smile because she doesn’t have much experience meeting guys. She also doesn’t have experience shooting them down.

Or, sometimes a girl is frowning so that she doesn’t get hit on, because she is so friendly when guys talk to her that they never leave! She is the sweetheart you thought was a bitch.

She’s beautiful, she’s exactly your type and she’s into Sci-Fi. If you started talking to her, that would be it for your evening, but you never find out, because she never makes that initial twenty-five seconds inviting enough for you to start a conversation.

The Only One of the Trusts Entirely Under Your Control

So we are basically moving away from external things that are out of your control. That's why we worked at changing the way you look at them, or even straight-up lying and pretending the situation or the girl is one in which you have a good reason to talk.

Now we get to the words you are going to say.

This is the first item that can be under your total control. In fact of all of them, it is, in some ways, the only one that you can ever completely control.

You can always decide what you say.

This is also why it can become a crutch for you.

Something you say can always extend the conversation by another two minutes. So you always say that “something” – and I don’t discourage taking advantage of what works.

It’s not real though. There is no such magic bullet.

I hope you’ve realized something either while reading this article or better still, in the last two weeks while reading about, thinking about or trying out my tips:

The words you say are always evaluated through the Situation, the Other Person, Your State and Your Self.

That's why “The Words” comes in the middle.

Well, that’s enough of a caveat, right? The words can help, can be prepared in advance, can be passed along and written down and used when you need them.

What to Say to a Girl to Get Her Interested Subconsciously…

So here’s some advice on the words and some stuff to try out.

Recognize that whatever you say is what produces images and thoughts and feelings. That means copping ideas from the guys who pole dance on our NYC trains and saying things like “Don’t worry, no one is going to get kicked in the face,” makes people think of getting kicked in the face.

Sure, that sometimes makes the passengers curious and gets more attention, but mentioning violence around women who aren’t already totally into you (and even those that are) has a 90% chance of triggering her automatic flight response:

“Get away from this guy, he might be crazy!”

“Don’t Think of a Red Ferrari”

With that said, there's one important insight to take away from the above point:

This also means that you can say things you do want in the negative.

“Ugh. Stop looking at me like you want me. It’s distracting.”

“Oh no, now all the girls in the place are staring at me. Do you think it’s easy being the hottest guy in a room full of women?”

But don't be vulgar!

Vulgar can work, but it is a specialized skill set, and if you were good at it, you would know. If you really can’t resist it, try it out when simpler things are already working too well, ok?

Second, Use Words You Want HER to Use.

“It’s so sexy the way they drop into that gritty beat after!”

“mmm… I feel like a chick: just smelling chocolate gets me turned on!”

Please take this as a start and go out there and say something, yes?

And If You Don't Know What to Say?

Don't worry about it–Craig has you covered. He recently wrote an entire free guide on why the words you say actually aren't all that important.

In fact, there's something else that's way more powerful than talking to a woman that can lower her “bitch shield,” connect with her more easily, and get her smiling in no time.

What is this curious non-verbal method that Craig's developed with some of his most trusted mentors based on real, scientific principles?

Click here now to find out why science says that you can attract any woman silently, without saying a word.