This is another episode of Ask Ruwando.

This question comes from Tom…

BRAND-NEW: The Fastest Way to Give Any Girl Multiple EXPLOSIVE Orgasms…

Alright, so this is kind of a deep topic.

I don't know if I can answer it in just a couple minutes.

But there are a few types of threesomes, right?

I’ll show you what I mean below:

… the most important thing is making sure that her emotional needs, especially, are met.

…If she gets jealous, if she gets triggered, or if she feels insecure… she's going to put a kibosh on it.

Even if you're like in the motions and everything seemed okay, she'll find a way to sabotage it.

Because that means you weren't paying enough attention to her.

The Key to Finding a Third Woman If You Have A Girlfriend (Note: You Can Use This to Find Two Women If You’re Single)

So if you're doing this with your partner, make sure you're communicating, and make sure that it's more about her–especially the first few times.

Because if you can do that, then she feels safe, and she feels like she's not losing anything.

She won't have any fears of you running off with the other woman, and she won't feel, “less than.” It'll be more fun for everybody.

So if you're trying to meet a woman while you're out, I let her be the one that initiates.

Because that'll allow the third woman to feel safer in doing that, and then let her kind of act as social proof for you, right?

Like, you won't have to do a lot of proving your attractiveness or attracting her… even seducing her.

TRENDING: If She Does This With Her Body It Means She’s Kinky & DTF (Most Men Totally Miss This!)

It's almost like it's more about their connection than your connection.

And some guys think they have to make these girls compete over them. Because then if they feel competitive at all over you, and you're the one holding all the power… that sounds cool in your mind, right?

BUT if they don't like each other, and they're competing… it's just not going to work.

It's going to divide your attention at the very least, and at the very most, it'll be some big dramatic thing.

Or they're not going to be into it.

So you want to encourage their connection and kind of be like, “the guy who's there.”

And it's almost like you let their surplus, or their arousal leak over you.

I mean, as the one guy with two women, you're kind of like holding down the masculine side of everything, right?

So you need to be the one taking care of the environment, making sure they feel good, kind of like being the host to the event, if you will.

So as far as making it happen, there are different touch techniques you can use.

I mean, if you've read The Game, Neil Strauss his book… they talk about the dual induction massage. Like, hey, let's all have a massage together.

CONTROVERSIAL VIDEO: These Subtle Touch Tricks Get Her Soaking Wet, Naked & On Top of You In Bed (Even If You’re “Just Friends” Right Now)!

It's kind of a clunky technique. I mean, it's kind of silly like, but that is one way like in encouraging touch.

Certainly, negotiating or trying to convince them does not work.

Ultimately, it's all about making both women feel safe and turned on… so here's the fastest way I know how to do that: 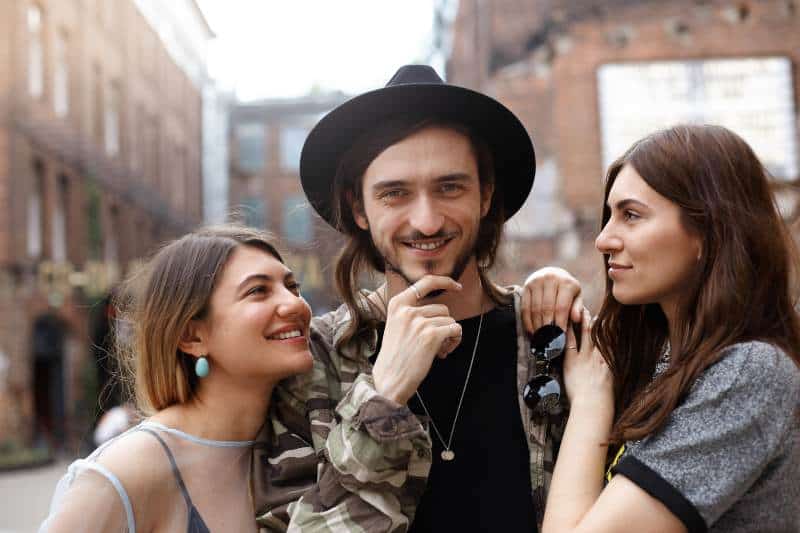 So this means don’t ogle the new girl, and give her all your attention.

You have to soothe them, calm their fears, and let your main girl know she has nothing to fear… and there’s no competition.

Specifically there are 3 stealthy spots you can touch a woman that will make her feel at ease… while also turning her on… and in a highly subtle way.

Each one of these SEEMS innocent and friendly… but secretly when you use them they’ll turn both girls on.

(Which is a hell of a lot smoother, and far more effective than the clunky “induction massage” I mentioned earlier by the way…)

… It’s a great way to set the mood… and once they’re touching, kissing and getting naked you can join in whenever you want (hell yeah):

Click here to see what these 3 stealthy and seductive touches are.

P.S. You ever notice how when you touch a girl here… she gets REALLY h*rny? Haha