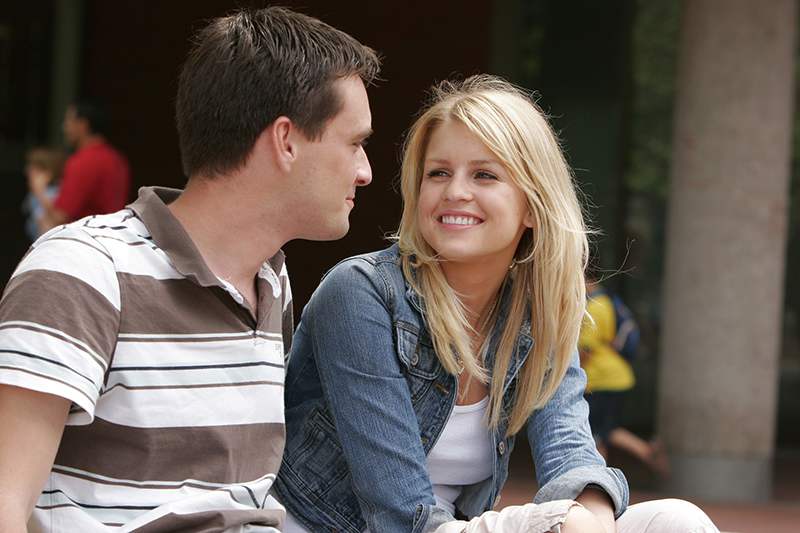 When approaching attractive women, most men think they have to be a clown. A lot of guys think, “Keep her entertained! Show her how great I am! Non-stop laughs!”

In reality, this is the single quickest way to repel a woman!

This is for a lot of reasons. These guys will come off as “nervous” or “needy”… and if a joke backfires? She's on to the next guy.

To help you out, I found this video from Nick Sparks, Gotham Club's old friend, positive force for masculinity worldwide, and all-around great guy.

It's a long video, but I recommend watching it all the way through: seeing the facial expressions and tones that Nick uses in demonstrating a lot of his techniques is absolutely priceless, and you'll get a lot more out of the video that way.

But if you're pressed for time, or want to work through the video in smaller chunks, I'm breaking it down so that you can cut to the time-stamped portions referenced simply by clicking on the relevant picture below. 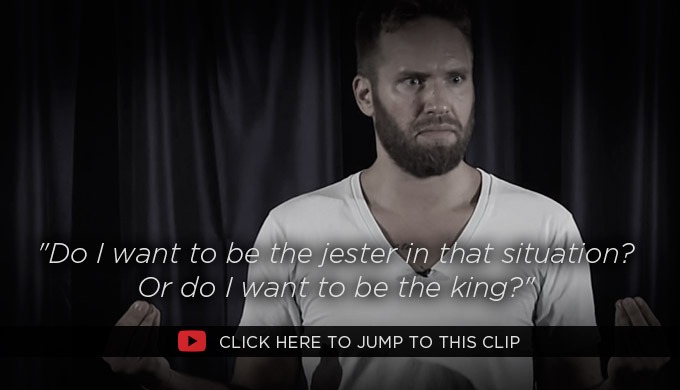 The Masculine Role In a Conversation (It's Not What You Think)

Let's start at 10:30. Nick does a great job of explaining what the masculine role is in a conversation with a woman. As a man, you should:

2) Provide validation for the woman.

Now it's important to realize what Nick means here, and this is what I'm talking about above. One of Nick's quotes from the talk is:

CONTROVERSIAL VIDEO: Can You Spot the Hidden Signs a Woman Is Interested In You? (Most Men Totally Miss These!)

“Do you want to be the jester? Or the king?”

Jesters provide validation without setting the frame. The King sits back and nods, “Yes, this pleases me, Jester.” It's a subtle difference, but one that's incredibly important.

Notice that as The King, YOU should drive the action… but it shouldn't be all about you, as we'll see in a second.

A minute later, at 11:30, Nick talks about some of the biggest conversational mistakes guys make.

The one that stuck with me most was that too many men nervously try to make themselves the center of attention.

So many men fall into this trap that it becomes self-fulfilling; since every other guy is trying to impress girls when they talk to them, you become “just another one of these guys” when you do the same.

Instead, as Nick notes, “It's much better to be interested instead of interesting.” Her role is to attract attention. That's what women do! You are there to be the King, setting the frame, “yes, this pleases me,” etc. 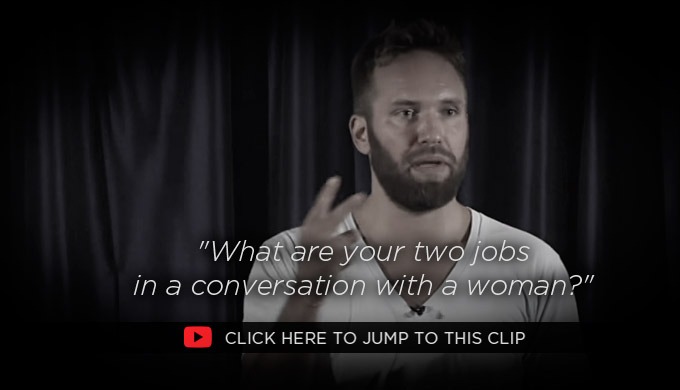 Your 2 Jobs In Any Conversation With a Woman

1) Get her talking as much as possible, and

2) Make her feel good about it. 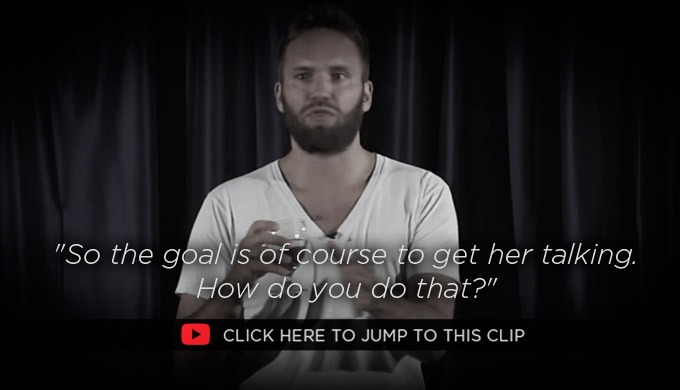 How To Get a Woman Talking

At the 14:20 mark, Nick goes into great detail about how to get a woman talking. I would highly recommend watching this section if you struggle with keeping a conversation going!

He goes through asking her questions, and using dominant body language to keep her talking.

But one of his best pieces of advice is “teaching her how to have a conversation,” at 16:50. Remember that most guys are coming up and trying to impress a girl, like a jester.

When there's a lull in the conversation, or a pause, most guys struggle for the next bit. Almost as if they think the girl is saying, “What else ya got?”

But that's not what they're saying. Nick has some brilliant advice on this: since most girls have guys acting like jesters around them, they don't know how to have the back-and-forth of a conversation!

So in a lull, you should do the opposite of what a jester would do. You're the King! You should have the “so what else ya got?” attitude!

When there's a lull in the conversation, you should just look at her, silently, with a “What else you got?” look on your face.

This is a powerful method that you really should watch in the video to see it in action. Nick's facial expressions and tone really nail it here. 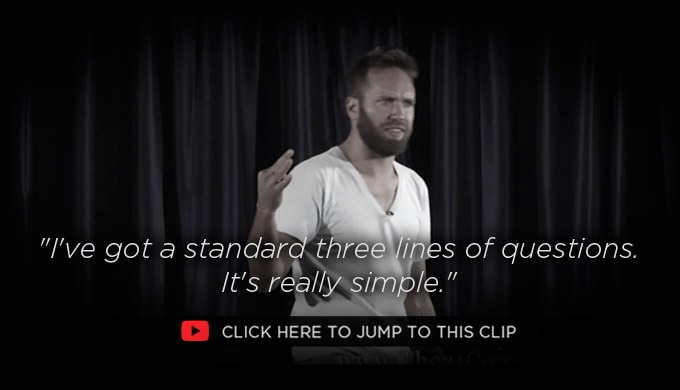 How To Deal With Shy or Socially Awkward Women

Some girls are socially-awkward enough that they won't take the hint, so Nick will give them a second chance. At 25:25 he gives his best “second chance” question with plenty of follow-ups:

Not too hard, right?

Shy Or Introverted? Click Here to See Why Talking Less & Doing More of THIS Gets Her In Bed With You…

This leads to a whole bunch of follow-ups that Nick explains in the video, but they all have one thing in common:

They're designed to elicit an emotional response in her!

“Do you have family there still?”

Those things subtly ignite her emotions… and will get her thinking about the interaction (and you) on a deeper level. 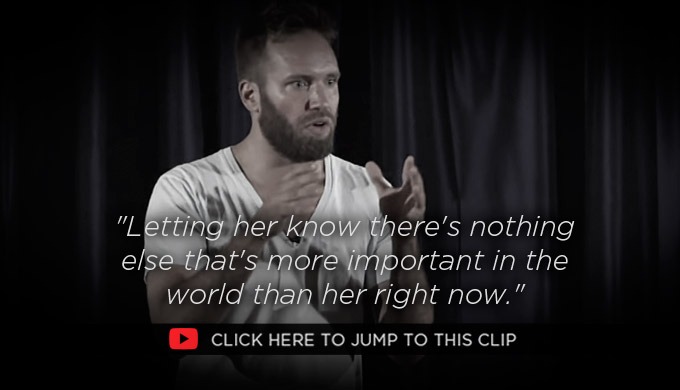 How To be “Fully Present” In a Conversation

Nick is also a big advocate of being fully present in a conversation (28:33). A lot of women complain that most guys don't listen, they're just waiting for their turn to talk.

Hell, I've been guilty of this in the past too. All it does is (again) make the conversation about you, not her. You're the jester again.

Instead, you should actively let her know that you're fascinated about what she's talking about. Not in a flamboyant way, but there are 3 strategies to do so:

1) “The Over-Empathetic Child Listening to a Story” (I'll let Nick describe this one at 30:12)

2) “Relating & Personalizing,” where you (quickly) relate your own personal experience, and then ask her more personal questions about it, and

3) “Following the Trail of Breadcrumbs,” where you follow the natural trail of the conversation she leaves for you. 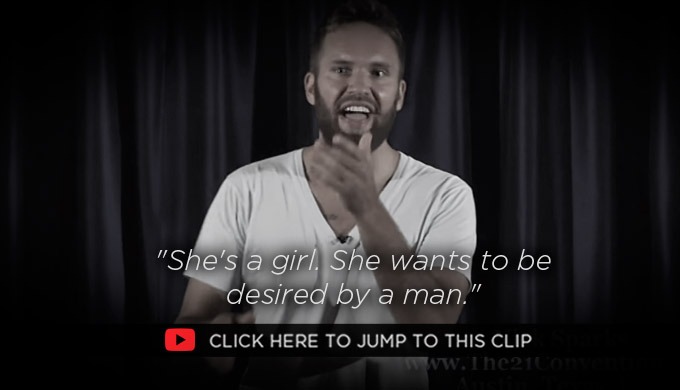 So now that you've got her talking, you need to follow-up with your second goal: making her feel good about it.

By far the most fun way of doing this is by giving her validation in the form of sexual interest (37:45).

I agree with Nick that women want to be desired by a man. And if she's giving you signals (holding your eye contact, filling gaps in the conversation, gets a real smile on her face, or points her hips at you), you need to respond!

If you don't respond with interest back, you're essentially telling her “thanks, but no thanks.”

Guess what? This is escalation! (40:00) Showing her that you're interested too. 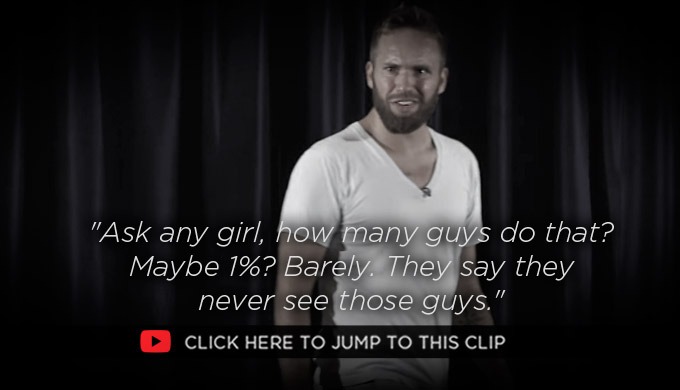 What If You Run Into a Girl Who's Not Receptive?

1) Be playfully challenging. Just go over-the-top with a “No you didn't. I don't believe you.” Even if she just said something obviously true.

(You know who employs this one a lot? Howard Stern. Listen to his show sometime if you don't believe me).

2) Playfully disagree with her. Just disagree with whatever she said strongly, then you can let her off with a “I don't know–I don't even know what that is.”

Again, as with all of the above, Nick's facial expressions and tone in the video cannot be understated!

4) The feauxmance. “That's the hottest, sexiest thing I've ever heard in my life!” Be over-the-top with it. Touch her, bring her in gently.

5) Playful disinterest. The example Nick gives is if a girl says she's from Ohio. Nick's from Michigan, so he'll respond with, “Oh, sorry to hear that,” followed by some joke about the Ohio-Michigan feud.

You can follow it up with, “But that's ok, I know a lot of people from Ohio,” and follow that up with another joke. 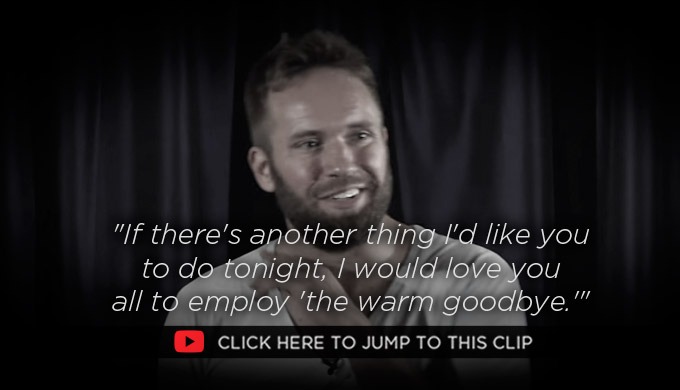 Finally, you have to know when to cut bait. For this, Nick uses what he calls “the warm goodbye” (47:10), which looks something like this:

“I have to get back to my friends, but it's been really great talking to you.”

That's it! You have to do this for a few reasons:

1) Save a chance for the girl to open up later in the night.

2) Because every other girl in the place is watching and judging, and you're putting on a show for them, and

3) Do it for YOU! She isn't rejecting you, SHE is socially awkward, and you're ending it on YOUR terms.

How To Not Be Creepy To Girls

Finally, Nick ends with a little bonus nugget at 55:10 during the Q and A after his talk. A guy asks him how not to be “creepy” around girls if you're making so much eye contact with them. Nick's response is priceless:

“Creepy is when a girl shows you she's uncomfortable somehow with something you're doing, and you keep doing it.”

It's the most succinct, perfect definition of creepy I've ever heard, but Nick adds an extra wrinkle:

Yes, you can come across as creepy by making too much eye contact. But, most guys make so little eye contact that they should over-compensate just to get back to “normal.” So most guys have little to worry about in this regard.

No woman has ever told her friends over Sunday brunch, “He’s such a great conversationalist, I can’t wait to blow him like a cup of hot soup.”

Don’t get me wrong, women absolutely love men who can carry an engaging conversation…

If you want that to happen, you’re going to have to turn her on.

And I’m no expert on the art of seduction by any means, I’m just a regular guy… BUT…

… from everything I’ve read up on and tried myself, there’s one strategy that’s given me more success than anything else:

And that's using your touch to seduce her.

In my experience, just by touching a girl she becomes way easier to talk to.

Plus she'll get flirtier, touchier, and A LOT more sexual when you touch her in the right spots.

And these 3 spots will not only get her wet, but she won't even realize what you're doing while it's going on: